Make a Monetary Donation $
Brides for a Cause had the opportunity to be a part of a locally produced independent film, Zilla and Zoe. Summer 2015, we opened up our boutique to the crew, so they could shoot their bridal store scene! 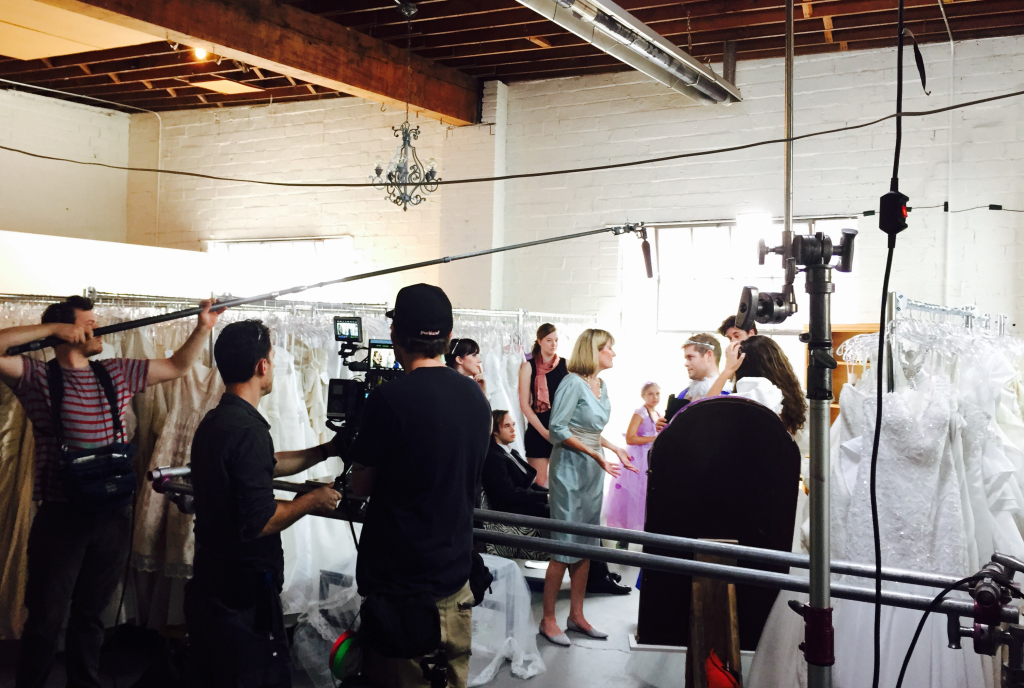 Here’s what Willamette Week has to say about this new film: When director Jessica Scalise hypes her new film Zilla and Zoe, she doesn’t have to wax poetic about her cast, her style or the movie’s autobiographical tint. Instead, she sums up the plot in one intriguing sentence: “It’s about a girl trying to turn her sister’s wedding into a horror film.”

So you might guess that Zilla and Zoe, which premieres privately at the Mission Theater on Friday, is a millennial splicing of Bride Wars and Carrie. Yet according to Scalise, the film is something else entirely: a family saga set in Portland that’s joyous, realistic and eccentric.

Zilla and Zoe trains its gaze on Sal (Greg James), the patriarch of an emotionally embattled family that includes his two daughters, Zilla (Sam Kamerman) and Zoe (Aida Valentine). Sal, according to Scalise, is “pretty complex because he’s a struggling father trying to raise two little girls all by himself, and he just wants to be a good dad.”

Sal’s parenting is questioned when one daughter, Zoe, becomes obsessed with making her own horror films and the other, Zilla, plans to get married. “There are a lot of characters in the film who are severely judged for who they are,” Scalise points out. “The wedding in the film is a same-sex wedding, and the characters get a lot of grief about it from some people. And everyone’s always telling Zoe, ‘Don’t make horror films, you’re being weird, you’re a very strange child, you should be playing with dolls or something instead.’

Portions of this narrative are inspired by Scalise’s own life, including her depiction of Zilla’s wedding. “When I was in college, I used to do wedding videography,” says Scalise, who studied creative writing and math at Stanford and film at USC. “There’s so much stuff that’s hilarious or horrifying or touching that you don’t put in there.” That’s why she “thought it would be really fun to make a movie about this big, crazy, somewhat disastrous Portland wedding.”

Zoe’s emergence as a proto-Wes Craven also echoes Scalise’s experiences as a filmmaker. While she was never as into horror as Zoe is, Scalise says that she “was definitely that little kid with the camcorder, forcing all my siblings and the neighborhood kids to put on a play or make a movie.”

That passion plays into “a scene in the movie where Zoe and her friends are about to do this big, dangerous stunt for their movie,” Scalise adds. “A little boy says, ‘You could die doing this. Are you sure it’s worth it?’ And Zoe’s like, ‘If I die, make sure this gets edited by Sunday.’ That is very autobiographical.”

After completing the Zilla and Zoe script—which was a quarterfinalist in a contest hosted by San Francisco’s Zoetrope studio—Scalise filled out the cast of two dozen actors with the help of Portland’s Cast Iron Studios and raised money online to fund the movi. While Scalise gathered enough cash to shoot the film, she knew it wouldn’t power the production past the final day of shooting, which forced her to use Kickstarter to raise the funds necessary to complete the post-production process.

About 150 people pledged money to the film on Kickstarter, resulting in a total of $20,000. The result is a film that looks more expensive than it is, which is also thanks to cinematographer Sean D. Brown, who shot the film on a RED Epic Dragon camera.

With Zilla and Zoe now ending one phase of its journey, Scalise says, with a laugh, that she tries to suppress her recollections of the more stressful moments of making the film, which required her to stage a brawl in Brides for a Cause, a bridal shop, using child actors. And as far as the movie’s future beyond the horizon of its Friday premiere at the Mission Theater, Scalise is looking forward to screening the film at festivals before securing it a wider release.

For now, Scalise seems to relish not only having completed Zilla and Zoe, but having directed a movie that uses iconic Portland locations like Voodoo Doughnut and the Peculiarium. She may have grown up in Oakland, but Scalise seems enraptured by Portland and says that some of her favorite parts of the film to shoot were the scenes set in Sal’s truck, which gave her the opportunity to ride around the city. She even features a quintessentially Portlandian flourish in the film—a scene in which Sal walks grumpily past a guy who’s wearing a lemon-yellow beanie and a fur coat and carrying a “Keep Portland Weird” sign.

For Scalise, that motto is more than just a bumper-sticker slogan—it’s the theme of Zilla and Zoe. “I love the whole ‘Keep Portland Weird’ thing,” she says. “To me it means, ‘Be who you are.’ That really inspired the film. The whole theme of the film came from the city.”